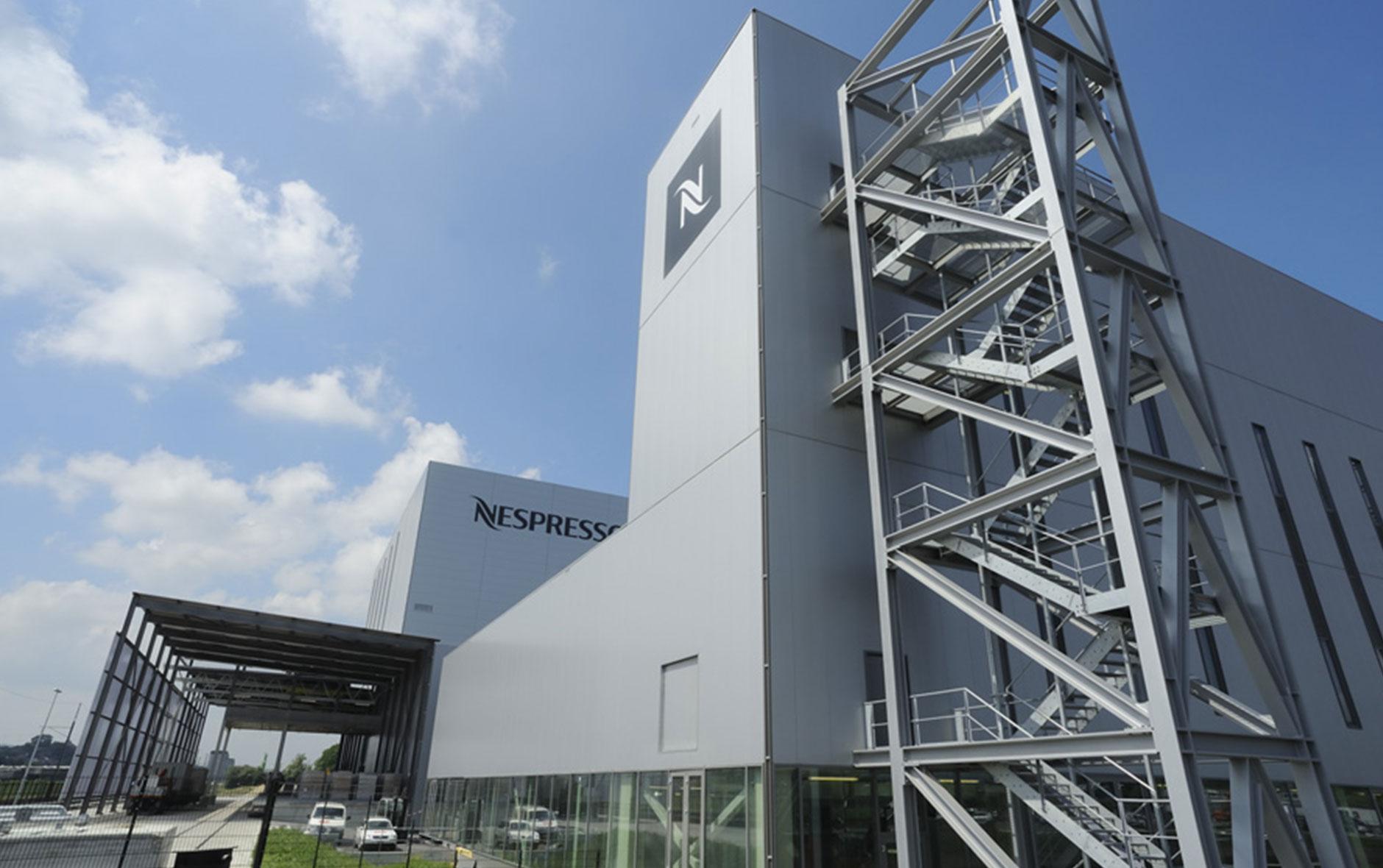 For the groundbreaking held at the site on April 25, 2013, Nespresso CEO Jean-Marc Duvoisin unveiled a symbolic first stone: a giant coffee bean made from the aluminium of approximately 800 Nespresso capsules. The sculpture sits atop a pedestal that holds a time capsule containing a PIXIE Steel Nespresso machine, a box of 16 Nespresso Grands Crus, an architectural plan of the site and a local newspaper from the groundbreaking day. Conceived by Jérôme Berbier, an artist and designer from Fribourg, the sculpture evokes the primary source of inspiration for Nespresso and signifies the future role of the production centre.

“More than laying the foundation of a new building, this day represents the concretisation of a major project in the company’s strategy. Initiated four years ago and carried by the continuous energy and determination of our teams and partners, this third production centre marks our confidence in our business model and in our future,” said Mr Duvoisin. “It is an investment in our coffee expertise and quality, two pillars for the sustainable growth of our company moving forward.”

The completion of the Romont production centre in 2015 will mark a further milestone in the company’s strategic development to meet growing consumer demand.

With a surface area of some 21,000 sq. metres, the future production centre will be anchored in the company’s unique Ecolaboration™ sustainability framework, integrating cutting-edge technology while minimising its environmental impact. The facility will capitalise on the expertise gained at the Nespresso production centres in Orbe and Avenches, in areas such as energy efficiency, waste separation and recycling. The proximity of the site to the national rail system will facilitate the rail transport of goods in and out of the factory, with 100% of green coffee being delivered by train.

"It is an investment in our coffee expertise and quality, two pillars for the sustainable growth of our company moving forward."

Overseeing the realisation of the project in Romont is Aubert Architectes of Lausanne, who were also involved in the production centre extension at Avenches and who contributed to recent amendments at the Orbe facility.

Similar to the Nespresso facility in Avenches, whose expansion was completed last year, a potential expansion of the Romont production centre has also been written into the blueprints, allowing it to accommodate the company’s steady growth.

“This site will allow us to meet the growing demand of consumers around the world for Nespresso coffees,” said Patrice Bula, Executive Vice President of Nestlé SA, responsible for the Strategic Business Units, Marketing, Sales and Chairman of Nespresso. “It is a strategic long-term investment that will allow us to support the future growth of Nespresso worldwide.”

A stimulus to the local economy

With the establishment of a third Nespresso production centre in Switzerland, Nespresso underpins its commitment to creating shared value through long-term investments in its home country.

Jérôme Berbier conceived a giant coffee bean made of
the aluminium from Nespresso capsules as a symbolic first
stone of the third Nespresso production centre in Romont.

This new site will enable the creation of direct and indirect jobs in the region, stimulating economic and social landscape of the town of Romont and the canton of Fribourg. Nearly 200 direct and qualified jobs will be created by the end of the first year of operation in 2015 and nearly twice that many are expected to be created by the end of 2016. Nespresso currently employees over 8,000 people worldwide, with more than 2,000 employees in Switzerland alone.

“This groundbreaking is an important step that marks the concrete implementation of Nespresso in the region. It is a strong signal of confidence in the economic development of our canton, and our shared focus on innovation and excellence,” said Beat Vonlanthen, Minister of Economic Affairs in the canton of Fribourg.

“Romont and the district of Glâne are living the beginning of a new beneficial, flourishing and dynamic era with the arrival of Nespresso. I am intimately convinced of that,” added Roger Brodard, mayor of Romont.

Shared values of quality and innovation

In addition to logistical considerations and the existence of a strong infrastructure in the region, the solid professionalism of a skilled Swiss workforce was also a decisive factor for Nespresso to establish its third production centre at Romont.

“The choice to locate the third production centre in Switzerland is a strategic decision. Switzerland offers a highly skilled workforce, essential for Nespresso to manage quality throughout the value chain,” said Patrice Bula. “Nespresso also shares values with this country such as quality, innovation and know-how.”