Nespresso announces the launch of Nespresso Talents 2021, its annual vertical filmmaking contest which aims to showcase extraordinary talent from around the world. For the sixth year, Nespresso Talents continues with its proposition by asking all submissions to be in a vertical plan (9:16), giving entrants a chance to explore their creativity through the format that is now beloved by the most popular social media platforms.

“Creativity and innovation are at the heart of what we do at Nespresso. We like to push the boundaries in many fields and explore new territories, whether it’s with the experiences we create or the places we go to find rare high-quality coffees. Nespresso Talents is an opportunity to foster incredible creative talent while engaging with a younger audience that embraces innovation with a disruptive spirit”, explains Anna Lundstrom, Chief Brand Officer at Nespresso.

This year, Nespresso Talents challenges filmmakers to share what “Doing is everything” means for them. With the unprecedent situation we live in, there has never been a time when being a force for good has been so needed. With that in mind, the contestants are invited to share their vision on the theme of Doing is everything by showing how they want to inspire people to follow this movement and help commit to creating a positive impact.

The contest opens for entries from March  22 to May 16 , 2021 on www.nespresso.com/talents. An International jury will choose the three best short films from a shortlist of 30. Each winner will not only receive funds for their film career but also an exclusive trip to the world-renowned 2021 Cannes Film Festival, where the selected short films will be formally announced and celebrated. The three authors of the selected videos will also receive mentoring sessions in Cannes with La Semaine de la Critique, a parallel section of the Cannes Film Festival that focuses on discovering new talents, revealing first and second feature films.

In addition to the international selection, Nespresso will reward local filmmakers through 10 national contests judged by local jury members. A new selection has been created this year: the film school award. It aims to reward the best video created by a film school student.

Determined to create a positive impact, Nespresso will fully compensate the carbon footprint of Nespresso Talents. In collaboration with long-time partner PUR Projet, each filmmaker taking part to the contest will be offered the opportunity to support agroforestry projects by sponsoring the planting of five trees. These trees will contribute to a large-scale initiative in partnership with PUR Projet transitioning coffee smallholders into organic coffee production through agroforestry, bringing to life the Doing is everything movement.

For more information about Nespresso Talents and its initiatives, visit Nespresso.com/talents 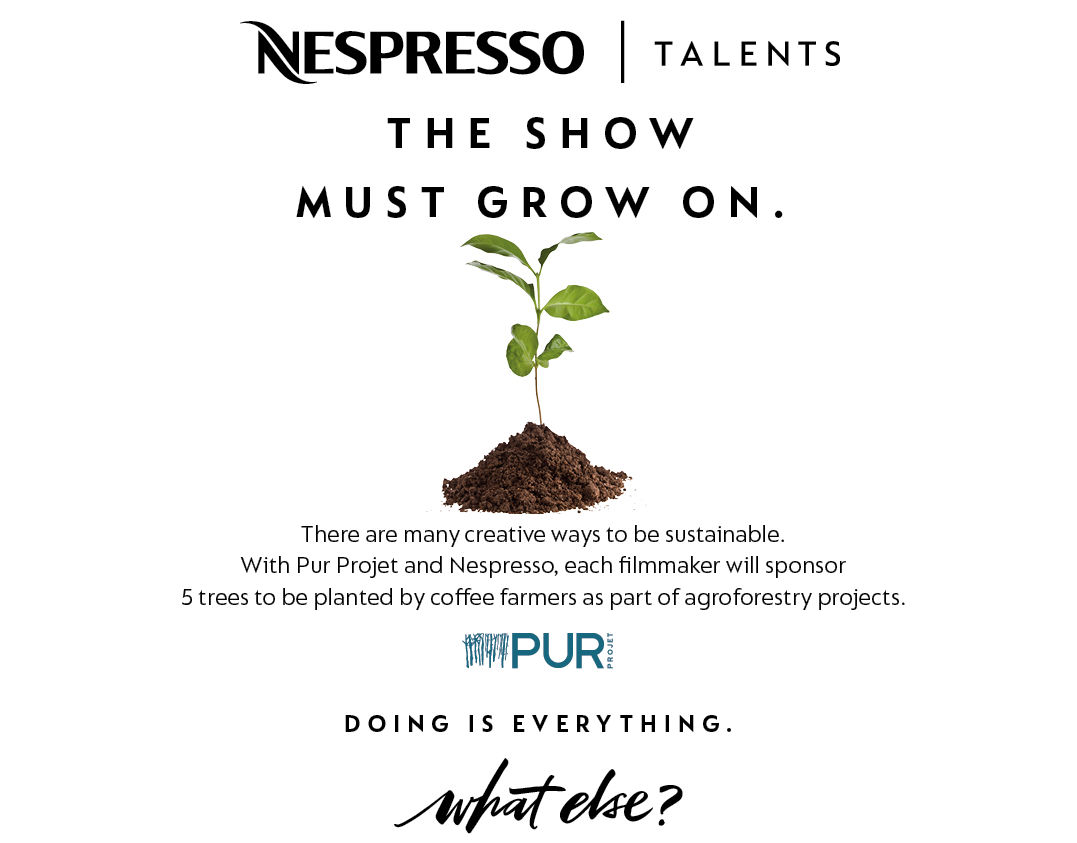