Driven by their shared values of innovation, excellence and environmental consciousness, Nespresso and Caran d’Ache come together again to create two instruments that fly the flag for design and recycling. Together, they have designed the very first Fixpencil made with aluminium from recycled Nespresso capsules with a lead comprised of recycled coffee grounds. Unifying elegance, eco-responsibility and bold design, a set of three graphite pencils carved from Swiss Wood, that also encase a lead made from coffee-grounds, completes this exclusive collection.

A responsible drawing and writing experience

Caran d’Ache and Nespresso are continuing to write the history of recycling together. Connected by their shared values of innovation, excellence and environmental consciousness, the two Swiss flagship brands have joined forces for a fourth collaboration that pushes the boundaries of sustainable design. In the wake of the popularity of the earlier three editions of the Caran d’Ache + Nespresso 849 ballpoint pen, their successful collaboration has given rise to a new collection consisting of two original products.

An essential companion of designers, artists and architects, Caran d’Ache’s Fixpencil will get the Nespresso treatment with a body made from recycled capsules. The mechanical pencil will don the bright and glossy ochre of the World Explorations Cape Town Envivo Lungo coffee capsules, for a contemporary yet elegant style. For the very first time, the pair take their collaboration to new heights as the graphite lead of the Fixpencil will be made from recycled coffee grounds. Thanks to ingenuity and ever-evolving expertise of Caran d’Ache’s craftsmen, design aficionados who care for the environment can also find these 100% natural leads in an exclusive set of three graphite pencils. Caran d’Ache has chosen to produce these pencils using FSC-certified beechwood from Swiss forests, strengthening the ecological credentials of this edition. These three instruments are cloaked in pink, green and gold respectively, that encase the Nespresso Reviving Origins' Esperanza de Colombia, Tamuka Mu Zimbabwe and Amaha Awe Uganda coffee capsules. 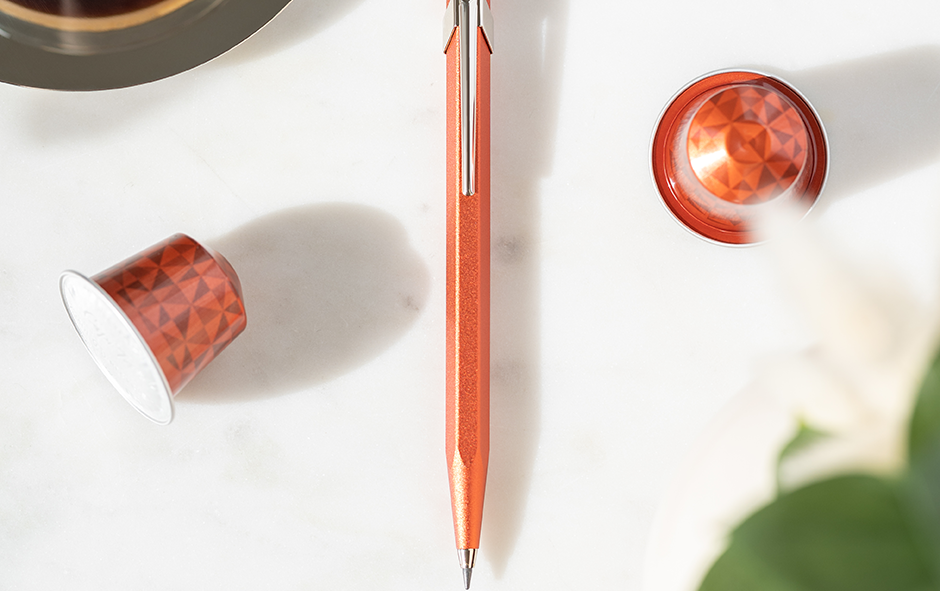 Created in 1929, the Fixpencil is an exceptional invention in more ways than one. Drawing on know-how acquired over 100 years by Caran d’Ache, it is the world’s first gripper-action mechanical pencil. A symbol of Swiss design thanks to its hexagonal shape and fitted with a patented mechanism, it has the honour of appearing on a Swiss postage stamp.

For this fourth collaboration between Caran d’Ache and Nespresso, this instrument – with its inimitable technical qualities – is the must-have companion of designers, artists and stationery enthusiasts who care for the environment. Whether it is the Fixpencil, with its glossy ochre colour of the World Explorations Cape Town Envivo Lungo capsules or the set of graphite pencils which also boast leads made from coffee grounds, these two new editions convey a strong commitment to the environment. It is an issue that remains at the heart of both companies, and so together they have embarked on the technical challenge of creating a high-quality instrument from recycled aluminium, with a coffee-ground graphite lead to illustrate the possibilities of the circular economy. By demonstrating that it is possible to endow used coffee capsules with renewed value, the collaboration aims to encourage all lovers of Nespresso coffee around the world to make a greater effort to recycle their capsules after use.

This commitment is inscribed on the bodies of the two instruments, which read: “A recycling story is in your hands”! The 100% recyclable cardboard packaging without glue continues the innovative and responsible approach adopted by these two Swiss icons.

Entirely designed and manufactured in Caran d’Ache’s workshops in Geneva, the Caran d’Ache + Nespresso Fixpencil and graphite pencils provide anyone eager to write the story of tomorrow with an eco-responsible drawing and writing experience. 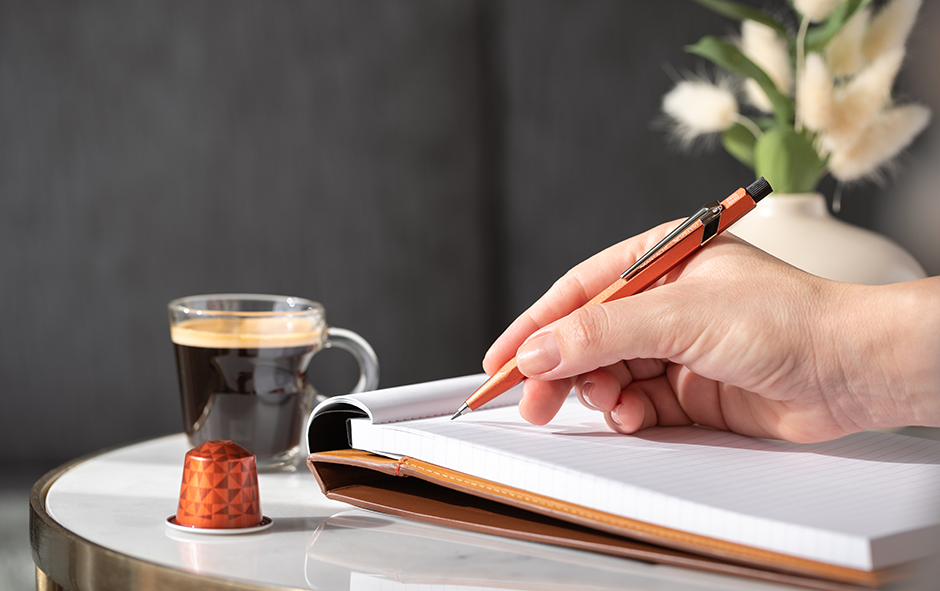 Endlessly recyclable, the aluminium used to create Nespresso capsules ensures the coffee inside remains fresh while preserving its flavour and quality. Nespresso capsules can be reborn in numerous forms, on condition that they are collected and recycled. For more than 30 years, as part of its global sustainable approach, Nespresso has managed its own aluminium capsule collection and recycling system in order to ensure a second life to its capsules.

Consumers can return their used capsules by means of collection at home or via one of the 100,000 recycling points around the world, in Nespresso boutiques, waste collection centres or via partners.

Once collected, the capsules are transferred to dedicated recycling centres managed by different partners where the aluminium and coffee grounds are separated from one another. While the coffee grounds are transformed into renewable energy and natural fertiliser, the aluminium recovered is melted down to be reused in numerous other products such as cans, window frames, bicycles and even automotive parts. Following the Victorinox Swiss army knife, the Zena vegetable peeler, the RE:CYLE bike from Velosophy and the first three Caran d’Ache + Nespresso editions crowned with success, the Nespresso capsules made from recycled aluminium have put their stamp on these new graphite pencils and the Fixpencil, an essential Swiss icon.

The Caran d’Ache + Nespresso Fixpencil and set of 3 graphite pencils will be available from 4 May 2021 from Caran d’Ache points of sale and at www.carandache.com.

For more than 100 years, Caran d’Ache has respectfully perpetuated the art of writing and drawing. A flagship of Swiss manufacturing tradition, the company develops and produces all its products in its Geneva workshops. Caran d’Ache instruments are renowned worldwide for their excellence and are produced in line with the requirements of the Swiss Made quality label.

Showing great concern for the environment, Caran d’Ache has placed sustainable development, and thus respect for human beings, at the very heart of its philosophy. The Geneva-based company incorporates environmental performance into its production procedures, in particular through the use of solar energy and FSC-certified wood as well as through the recycling of any waste products.

A key reference point for numerous artists and designers around the globe, Caran d’Ache continues to innovate. To bring its creative education values to life, Caran d’Ache is committed to providing teachers with artistic training and supports promising young talents in both the cultural and sporting arenas.

A proud family business, Caran d’Ache now boasts a staff of more than 300 employees and has 25 shops in Switzerland and abroad, more than 120 shop-in shops and an online store.